Jasper, named in honor of Sergeant William Jasper, a Revolutionary War Soldier, was settled in 1815, but was not incorporated until 1888. The first significant growth of the area was realized in 1886, when the Kansas City-Memphis and Birmingham and the Sheffield and Birmingham railroads were completed through Jasper. The population grew from 200 people in 1886 to more than 3,000 in 1890.

Walker County was created by the Alabama legislature on 1823 Dec. 26, and was named for U.S. Senator John Williams Walker.

The county is located in the northwestern part of the state, and is bordered by Winston, Cullman, Blount, Jefferson, Tuscaloosa, Fayette, and Marion counties.

Walker County is exceeded only by Jefferson County in the production of coal. Walker County flourished because of coal, timber industries and the location of railroads just before the turn of the 20th century.

The county is drained by the Black Warrior River and Mulberry and Sipsey Forks. 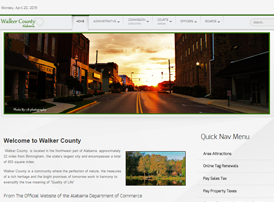 The county seat is Jasper, and other towns and communities include Carbon Hill, Cordova, Dora, Eldridge, Kansas, Nauvoo, Oakman, Parrish, Sipsey, and Sumiton.

Settled in 1886 because of coal mining and the railroad, is joined today by manufacturing and agriculture industries.

Cordova, AL is a city that was shaped by coal mining and a textile mill, and is now rising from the destruction of an EF-3 and an EF-4 tornado in April of 2011.

The City of Dora is an old city with new ideas. The town has a lot to offer business, industry and residents. Low taxes, a friendly government and room to expand makes ideal for business.

Originally called Camp Springs, an Indian camp site. With the completion of the Bylff Road it became a stage coach stop. The town incorporated in 1970 and today has a population of 184.

Located in the extreme western portion of the county, was a stop on the Burlington Northern Railroad. Today it has a population of 260

Located in northwestern Walker County, was earlier known as Ingle Mills until Tom Carroll named it after Nauvoo, Illinois. The town was established in 1888 because of the Northern Alabama Railway construction. Population in 1990 was 284.

One of the oldest towns in the county was called Day's Gap and Marietta prior to 1895 when it was incorporated. Population in 2000 was 944.

Originated as Hewitt, was a post office served by the Pony Express and became the junction of the Sheffield, Birmingham and Tennessee and the Georgia Pacific Railroads. The population of Parrish is 1268.

Located on the banks of the Warrior River, is the site of Warrior Town, an original Indian settlement. The population in 2000 was 552.

Incorporated in 1952 and named because of its location at one of the highest elevations in the county. Earlier names included Commercial and Democrat. The 2010 population was 2,520.